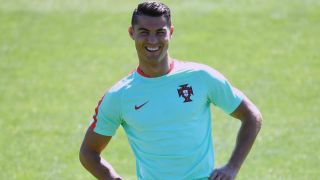 France's players and coach Didier Deschamps are focused on shackling Cristiano Ronaldo in the Euro 2016 final and consider his aerial prowess to be just as much of a threat as the Real Madrid star's lethal ability with either foot.

Ronaldo scored the eye-catching breakthrough goal in Portugal's 2-0 semi-final win over Wales in Lyon, leaping and hanging in the air to plant home an unstoppable header from Raphael Guerreiro's 50th-minute cross.

The sight of the 31-year-old three-time Ballon d'Or winner performing as a fearsome centre-forward, set alongside his other supreme talents, gives Deschamps plenty to ponder ahead of Sunday's showpiece at the Stade de France.

"If there is an anti-Ronaldo plan, no one has yet found there recipe," Deschamps said. "He's a very top player, he's got great athletic attributes in the air.

"It's not just that he can get up high but he can hang there was well. His six-pack is there for a reason, but he has the two things that are very tough to combat in football - pace and the aerial threat.

"It would be great to neutralise him and we need to also limit his influence. That will be important to do."

France captain and goalkeeper Hugo Lloris will insist his backline are on their guard to prevent Ronaldo making his presence felt in the air.

"When you play against opposition players like Ronaldo from set pieces, who have the physical attributes to hang in the air, you have to get up early to make sure they don't get the run on you, because otherwise it is very difficult to get to the ball.

"It is not only Ronaldo who is a threat from set pieces. They have a lot of big fellas in the team so you have to respond collectively to set-piece situations.

"The match will come down to fine margins. Set pieces are a part of that and we will have to be determined, concentrated and aggressive in that area."

Ronaldo is set to feature as a centre-forward alongside former Manchester United team-mate Nani, as he has done for much of the competition, but his forays out to the left flank will bring him into confrontations with a familiar foe - Manchester City right-back Bacary Sagna.

"I don't need to praise Cristiano Ronaldo, everyone is familiar with him," said the former Arsenal man, who has been an ever-present at Euro 2016.

"They know that he's up there - he's one of the best in the world, if not the best. He has a great deal of ability, he has worked very hard to get to the level that he's at at this moment in time.

"As a defender I try to defend as a I do against against anyone, to afford them as little space as possible and to be quick and ready to try to intervene."

Sagna added: "Sure, he's an exceptional player, but I have to play against top players every week so it doesn't scare me."