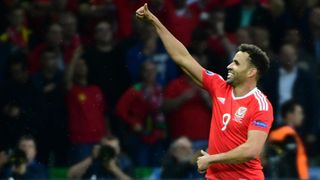 Wales star Hal-Robson Kanu might be out of contract and without a club but the surprise Euro 2016 star says he has no shortage of offers.

Robson-Kanu chose to let his contract with Reading run down and expire ahead of the European Championship, which might prove a smart move with his form at the tournament the perfect advertisement.

Robson-Kanu is among a host of players on two goals at the tournament, two off leading goalscorer Antoine Griezmann, but his second goal, which came in the quarter-finals against Belgium, captured the imagination when he held off two defenders to control a difficult ball before pulling off a sublime turn and finish to put Wales 2-1 ahead.

And now Robson-Kanu says his agent is fielding calls from all over the world, though he will not make a decision on his future until after the Euros.

"There's offers from around the world," Robson-Kanu told BBC Sport.

"I've made no secret of my desire to play in the Premier League and if that's the best place for me then I'll be there.

"I made a decision to run my contract at Reading down. I've been there 12 years, given a lot of service and felt it was the best decision for myself and my career to decide where I go next.

"I've been aware of clubs coming in for me in the past, bigger clubs and for whatever reason it didn't happen so it's probably one of the best decisions of my life.

"It's funny, a lot of people are making a big deal of it. I had offers before the tournament started. Good offers from good, progressive clubs, but I made a decision to wait until after the tournament."

Another goal in the semi-finals against Portugal would top off an amazing tournament to date, and Robson-Kanu is relishing the chance to test himself against Real Madrid defender Pepe.

"We're in a major tournament so there are world class players everywhere. I'll relish it and look forward to the opportunity and we’ll give our best as a team and see what happens," he said.