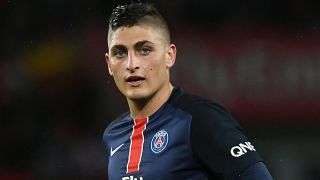 United broke the transfer record previously held by Gareth Bale following his €100m move from Tottenham to Real Madrid in 2013 to lure Pogba back to Old Trafford ahead of the 2016-17 campaign.

Verratti has also been valued at €100m by some, but the Italy international believes it is time to put things in perspective.

"I am not worth €100 million," Verratti was quoted as saying by La Gazzetta dello Sport.

"We are just playing football. These amounts of money make me laugh. No one is worth that much.

"And I think it is bad for the players for whom such fees are paid as well because people expect impossible things."

Verratti, 24, has been linked with a move to Madrid on more than one occasion, but he is in no rush to leave PSG.

"I always tell those who say I should join Real Madrid that maybe they are right, but that there are more important things in life," he added.

"I am part of a big family at PSG, with a project that I have been involved in for five years.

"We are still behind three or four teams [in Europe], but that only serves as motivation. At PSG, the means are there to reach the very top and I would not mind becoming captain here."