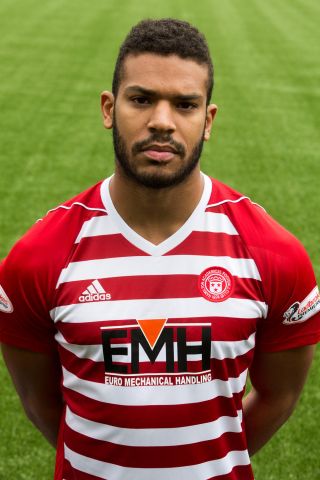 A superb 89th-minute winner from Marios Ogkmpoe completed a remarkable second-half comeback from Hamilton as they clinched a place in the Betfred Cup last-16 with a 3-2 win over Lanarkshire rivals Airdrie.

The League One side appeared to be cruising into second position in Group F on the back of first-half goals from Callum Smith and Ally Roy.

But Accies refused to roll over and after two quick-fire penalties from Ross Cunningham soon after the restart had pulled the visitors level, Ogkmpoe’s sensational strike sealed an impressive turnaround.

Airdrie dominated much of the first half and took a deserved lead in the 10th minute when Sean Crighton’s low cross was smashed in at the back post by Smith.

Roy doubled the home side’s lead 14 minutes later with an impressive half-volley from 20 yards after James Cowan’s free-kick had diverted off the wall and into his path.

Hamilton came out flying after the break and were awarded a penalty two minutes into the second half after Adam Eckersley had fouled Aaron McGown, with Cunningham making no mistake from the spot.

Cunningham then levelled the scores on the hour, again from the penalty spot after Calum Gallagher had handled the ball in the box.

In the dying stages, Ogkmpoe sealed the win in dramatic style, turning his marker to fire a fantastic half-volley in off the underside of the bar from the right-hand corner of the box.