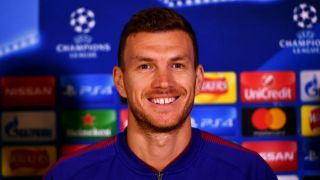 Edin Dzeko returns to England with Roma confident he is a better player than when he featured in the Premier League for Manchester City.

The Bosnia-Herzegovina forward scored 72 goals in four-and-a-half seasons with City, before moving to Italy's capital, initially on loan, in August 2015.

After making that switch permanent, Dzeko enjoyed a prolific campaign last term, registering a club-record 39 goals for Roma, including 29 in Serie A alone.

Ahead of his team's clash with Chelsea in the Champions League on Wednesday, Dzeko was asked if he was now a "different player, a better player" than a few years ago.

The 31-year-old replied with a smile: "I don't know, I think I am actually. Older, better, like they used to say.

"I feel good, I'm healthy and that's the first and most important thing. For the two-and-a-half years in Italy I can be happy with what I did. All of these goals I've scored are also because of my team-mates. They're very good.

"I never want to stop and I want to try to be even better."

Dzeko's form earned recognition earlier this month when he was named on the 30-man shortlist for the Ballon d'Or award.

"I cannot [win the award]," he added. "I'm just proud to be there. That is also thanks to my team-mates."

Chelsea have lost their last two Premier League games, including a shock 2-1 defeat to rock-bottom Crystal Palace last weekend, and Dzeko expects a response from Antonio Conte's side.

Dzeko: "Chelsea are an excellent side and they'll be smarting after losing at the weekend. We have to focus on our own game." October 17, 2017

"I think that's the English Premier League. You can win against the best teams and then lose against the last," said Dzeko of Chelsea's loss to Palace.

"Chelsea is a great team with some amazing players. It will be much more difficult for us than it was for Crystal Palace, even though they won the game. Tomorrow [Wednesday] we'll maybe play also against an angry, but top team. Their coach will put pressure on them.

"We didn't come here to play and lose, we came here to give our best and have a positive result."