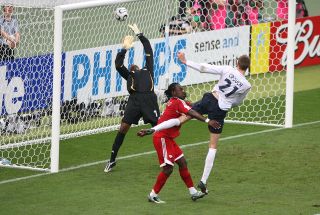 A 2-0 victory over Trinidad and Tobago gave Sven Goran-Eriksson’s side their second victory in Group B and a passage to the knockout stages with a game to spare.

England had got their tournament off to a winning start thanks to a solitary own goal against Paraguay but faced stubborn opponents in their second game. The Caribbean outfit – the smallest nation to qualify for the World Cup – had held Sweden to a goalless draw in their opening match and threatened to do the same against England as they frustrated the favourites in Nuremberg. England were poor in the first half and John Terry’s goal-line clearance prevented Coventry striker Stern John giving the Soca Warriors the lead.

Eriksson threw on Wayne Rooney for a comeback with 30 minutes left in a bid to turn the tide. The Manchester United forward had broken a metatarsal less than seven weeks earlier. Michael Owen departed after missing two good chances. Winger Aaron Lennon was also introduced as England looked for inspiration, resulting in David Beckham moving to right-back.

The breakthrough came in controversial circumstances with seven minutes left. Peter Crouch got the better of Brent Sancho to head home Beckham’s long delivery but television footage showed the striker had pulled the Gillingham defender’s ponytail to gain an advantage. Sancho later became sports minister in his home country and said: “I think Peter Crouch is probably the most hated Englishman in the history of Trinidad and Tobago because of that goal.” Steven Gerrard added some sheen to the scoreline with a stoppage-time strike.

The victory was England’s eighth in a row – a post-war record. But Eriksson’s team continued to labour. Henrik Larsson’s late equaliser for Sweden denied them a third group win but not top spot, and they beat Ecuador 1-0 in the last 16. Penalties proved their downfall after a goalless quarter-final against Portugal during which Rooney was sent off. Frank Lampard, Gerrard and Jamie Carragher all missed from the spot.