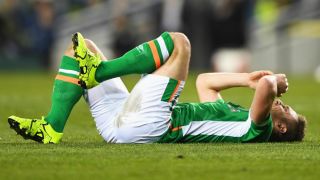 Kevin Doyle is in no danger of missing Euro 2016 after sustaining an injury in the Republic of Ireland's friendly against Switzerland on Friday, according to Martin O'Neill.

Doyle, who was making his first international appearance in 16 months, had to betaken off on a stretcher in the 27th minute after suffering a deep gash in his leg following a challenge with Norwich City defender Timm Klose.

The Colorado Rapids forward was immediately rushed to hospital for treatment, but the initial reaction suggests he will not be sidelined for too long .

"Our doctor just told me it's a deep cut and they're cleaning it out, but there's nothing broken which is great from our viewpoint," O'Neill confirmed.

"He's going under anaesthetic now to get it stitched up and hopefully everything will be alright."

Asked if Doyle was a chance to miss the Euros, O'Neill replied: "No, hopefully the cut doesn't get infected. Nothing's broken and that's the case."

Ireland secured a 1-0 victory at the Aviva Stadium in Dublin thanks to Ciaran Clark's header in the second minute.

"We'd worked on that [set-piece routine], we'd been in those positions and I knew there was a chance of Shane Duffy winning headers for us. It was an easy finish," Clark told Setanta Sports.

"We need to be concentrated throughout the whole game. We didn't have as much possession as we would have liked but once we got the goal and sat in we were quite comfortable."