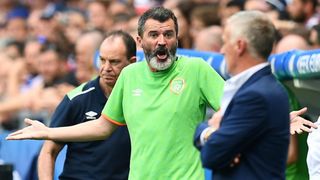 Roy Keane would not be able to double up a club management role with his position as Republic of Ireland assistant, says Martin O'Neill.

The former Manchester United captain has assisted O'Neill with Ireland since November 2013 and helped his country to the first knockout round of Euro 2016.

Keane, who formerly managed Sunderland and Ipswich Town as well as having a stint as number two with Aston Villa, has been linked with the vacant job at Premier League side Hull City.

O'Neill is pleased to see Keane in the frame for management jobs, but does not think he could fill two positions at the same time.

The Ireland manager told The Sunday Times: "If you are going in to manage at club level, that's your job. You couldn't do the two.

"Roy can answer for himself but I think he would feel that way too. With his experience of Villa in mind, if an assistant manager's job position occurred again, he would maybe have second thoughts about it.

"In one aspect, I'm quite pleased that Roy's name is being mentioned again. It feels like he's really contributing. I would really be disappointed if he left but I don't want to hold anybody."