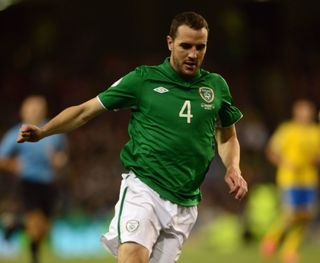 Ireland finished their disappointing FIFA World Cup qualifying campaign on a high on Tuesday as they defeated Kazakhstan 3-1 at the Aviva Stadium in their final Group C encounter.

Dmitriy Shomko opened the scoring for the visitors with a stunning strike, before a Robbie Keane penalty and an O'Shea goal put Ireland ahead.

Shomko then spoiled his earlier work by putting past his own keeper to seal the hosts' victory.

Despite the win, Ireland still finished fourth in their pool with 14 points from 10 games, and their failure to mount a sustained challenge saw former manager Giovanni Trapattoni leave by mutual consent last month.

Sunderland defender O'Shea is now keen to see a boss appointed who has thorough knowledge of the Ireland team, with the likes of Mick McCarthy and Martin O'Neill reported to be among the contenders.

And the 32-year-old says the squad are desperate to atone for their poor campaign by reaching the net European Championships in France.

"All the names mentioned have been great.

"Whoever gets it will have a team hungry to qualify for the European Championships."

O'Shea admitted the side were disappointed to concede against Kazakhstan, but was happy to be among the goalscorers and send the Irish fans home happy.

"We would have liked a clean sheet," he added. "It was a hell of a strike from the lad to put us behind but I thought the reaction from the lads was fantastic.

"Obviously we got the rewards and we could have had one or two more.

"I was a bit of a poacher (for my goal) and thankfully was able to tuck it away. We gave the crowd a little something to cheer."