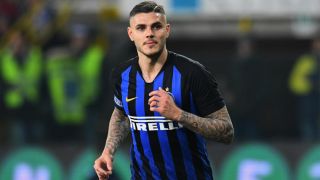 Juventus have made an enquiry to Inter to learn whether Mauro Icardi would be interested in a move, chief football officer Fabio Paratici has confirmed.

Icardi's future has been thrown into doubt after he was stripped of the Inter captaincy last week.

Wanda Nara, his wife and agent, insisted on Sunday that the Argentina striker does not want to leave but there are suggestions the club could look to sell before next season.

Paratici says Juve have informed Inter of their possible interest but has stressed this is relatively normal practice for the club.

"We asked for information," he told Radio Rai. "We wanted to know what Icardi thinks about playing for Juve.

"What we did was to inform them [Inter] that, if Icardi were to change club, Juve could be interested. These are things all clubs do with a lot of players.

"There has been no contact lately with Mrs Icardi. He's an Inter player and we have an important few months ahead."

Paratici also appeared to confirm Juve's interest in rising Roma star Nicolo Zaniolo, although he says the 19-year-old is one of many promising players they are monitoring.

"Very good young players, we are following them," he said when asked about Zaniolo, as well as Federico Chiesa, Sandro Tonali and Nicolo Barella.

"The list I wrote down was of players who it's pretty easy to tell are talented. It could have been put together by me or anyone who is even a little interested in football."

It has also been reported that Juve would consider allowing Paulo Dybala to leave as part of a deal to bring in either Mohamed Salah from Liverpool or Kylian Mbappe from Paris Saint-Germain.

However, Paratici has dismissed the speculation, saying the Serie A leaders have already done good business by agreeing pre-contract terms with Aaron Ramsey, who will join from Arsenal on July 1.

"At this moment, it's all fantasy football," he said. "It's only February, so nobody knows what could happen in June. We are proud to have brought Aaron Ramsey to Juve, as he is a great signing."