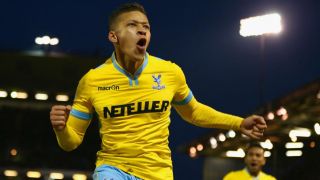 Alan Pardew lauded the qualities of Dwight Gayle and Jason Puncheon after the pair inspired Crystal Palace to come from two down against Burnley to secure a dramatic 3-2 Premier League victory.

Palace fell behind to goals from Ben Mee and Danny Ings inside the opening 16 minutes at Turf Moor, but pulled one back before the half-hour mark when Gayle struck.

Puncheon levelled matters early in the second half  before setting up Gayle for his second three minutes from time.

Pardew was fulsome in his praise of both players, who were also on the scoresheet in last weekend's 2-1 victory over Tottenham.

"He [Gayle] seems a very uncomplicated player to me," Pardew said. "He's very straightforward in his work.

"He's quick, good in the air and has two feet... blimey, there's not much more you could want is there really?

"He's got a good attitude, all he needs is experience and to grow in his confidence.

"Like Puncheon - when I had him at Southampton he wasn't the player he is today.

"Because he's played in the Premier League he's got that inner confidence that he can play at this level and that's what players like Dwight Gayle need to find."

Pardew has now won all three of his matches since taking over from Neil Warnock, and the former Newcastle United boss believes a fresh appointment can help the players get over certain mental hurdles.

Palace had not scored a Premier League goal away from home since November until Saturday's game, and Pardew feels a fresh outlook helped his players when they went behind.

"Sometimes that's the benefit of a new manager," he said. "That [their failure to score away from home] is not in the memory bank, I'm just wanting to get back in the game [when they fell two down] and give them different signals.

"But also the work we did this week was very much on offensive play and I felt we would score today."