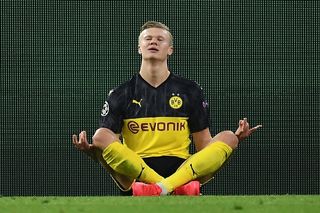 They say imitation is the sincerest form of flattery, but it’s doubtful whether Erling Haaland will feel that way right now.

After goals from Neymar and Juan Bernat secured Paris Saint-Germain’s progress to the quarter-finals of the Champions League at the expense of Borussia Dortmund, a dig was aimed in the direction of the teenage striker.

On the pitch, and then in the dressing room, PSG players mimicked Haaland’s trademark ‘Zen’ celebration, sitting cross-legged in a meditative pose.

It came in response to Haaland’s Snapchat post from his Paris hotel room before the game, which was captioned ‘My city, not yours’.

The Norwegian international had scored twice in the first leg to give Borussia a slender advantage over PSG, but was effectively shackled as the French side won 2-0 last night in a match played behind closed doors.

Haaland has taken European football by storm this season, with an incredible 40 goals from 33 appearances for Red Bull Salzburg and then Dortmund, who he joined in January.

The teenager has been a revelation, coming to wider attention with a hat-trick on his Champions League debut against Genk back in September.

He registered ten goals in the competition overall but couldn’t add to that tally when it mattered most last night, enabling the PSG players to get their own back for his pre-match comment.

After sitting on the pitch to copy Haaland’s celebration, they then did the same for Kylian Mbappe’s Instagram live video.

Neymar later posted an image of himself in the same pose with a caption that referenced Haaland’s comments.

While PSG move on to the next round, Dortmund are left to focus on finishing the Bundesliga season strongly. They are currently second in the table, four points behind leaders Bayern Munich, but have lost just once since Haaland joined.