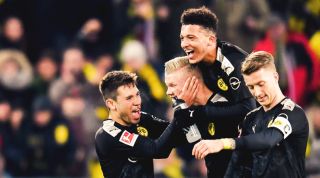 Eight minutes on the clock, 20 players to guess.

NOW TRY Quiz! Can you name every current Bundesliga club?

Who doesn't love Borussia Dortmund? Except for Schalke fans. And PSG, tonight. And Thomas Tuchel, actually. And Pierre-Emerick Aubameyang, since he fell out with the club when he left...

OK, a lot of people don't like Dortmund. And a lot of teams have felt the full force of their attack over the years.

Since Jurgen Klopp left Signal Iduna Park back in 2015 - five years ago, now - Dortmund have had four bosses and a shedload of talent wear the famous yellow and black.

How many of their top scorers can you name?