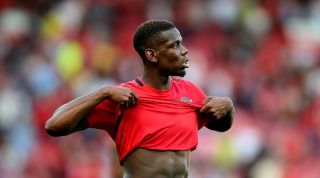 Pogba has endured an injury-hit campaign and been restricted to only five Premier League starts in 2019/20.

The France international is nearing a return from an ankle problem following surgery, and Solskjaer has leapt to the defence of the midfielder after he was accused of lacking commitment to the club.

“Paul has had a terrible season with injuries and he is desperate to play football," he said.

"So if there is one thing I know about Paul it’s that he loves playing football and training, and it’s been playing on his mind.

“Anyone who is injured, you cannot wait to get back on the pitch, and you feel so free and he has been playing with pain so I am sure when he is pain and injury free he will enjoy his football.

“I see a boy who is fed up with being injured and who is desperate to play football. Paul has always been a top professional so I don’t have any doubts that when he comes back he is going to enjoy himself."

Scott McTominay is also on his way back from injury, having had his leg brace removed this week.

“It will definitely help us because they played so well, they have been fantastic for us," Solskjaer added.

"Scott has had a fantastic season for us until he got injured and Paul has proven before how good he is.

“Fred and Nemanja have been absolutely terrific for us the last few months because they have had to play every game.

“I think they will have a word in the say and they are not just going to come and take our places, we want to play.”