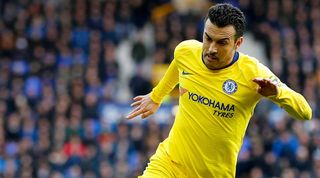 The 32-year-old’s future at Stamford Bridge is up in the air, as his contract expires at the end of the season.

Pedro has made just four appearances for Chelsea this season in the Premier League and appears unlikely to be offered a new deal.

And he has left the door open to the possibility of returning to the Camp Nou, where he enjoyed huge success before moving to London in 2015.

“It's an option that's always there and that I hope it could happen,” he told SER Catalunya (via Sport).

“Everyone knows what I feel for the club and it's evident that it's a possibility to go back. I've always said it.

“It's a club I have special love for because I support them. I've had so many experiences there and was there so many years, I feel loved by the fans.

"I don't know if it's in the hands of the president, the coach or whoever. I think for them my return is difficult but it's clearly a possibility."

He joined Chelsea in 2015, helping the club to the 2016/17 Premier League title before winning the FA Cup and Europa League in subsequent years.

QUIZ! Can you name the last 50 scorers in Arsenal vs Manchester City games?