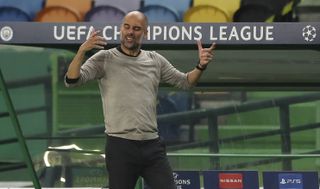 City were stunned 3-1 in their quarter final in Lisbon after they imploded late on thanks to Raheem Sterling’s astonishing miss.

Kevin De Bruyne cancelled out Maxwel Cornet’s opener before Moussa Dembele made it 2-1 after a VAR check on a possible foul on Aymeric Laporte with 11 minutes left.

Sterling’s shocking miss – when he fired over an open goal from five yards – sparked a collapse and 59 seconds later an error from Ederson gifted Dembele a second with three minutes left.

City have now been knocked in the quarter-finals for three straight seasons.

Guardiola told BT Sport: “One day we will break this gap.

“The second half was OK, I had a feeling we were better but you have to be perfect in these competitions.

“I don’t want to talk about the circumstances (of Dembele’s first goal), it looks like I’m complaining or finding excuses. We are out. We did a lot of good things and in the end it was not enough.

“We made mistakes in both boxes at key moments and that’s why we are out.

“We scored a magnificent goal but unfortunately we missed another one. You have to be perfect, you cannot make mistakes.”

Guardiola is yet to get past the final eight in four attempts with City having also lost in the last 16 in 2016-17.

De Bruyne told BT Sport: “We need to learn. It’s not good enough and that’s it.

“Different year, same stuff. The first half wasn’t good enough, we started slow but in the second half we played really well.

“In the second half we played well and had them under pressure. We played more offensive like we normally do. At 2-1 if Raz scores it’s 2-2 and the game goes on. That’s football, it’s fine margins. They made it 3-1 and the game is over.”

The Belgium star also refused to blame the officials after Dembele’s first was allowed to stand despite the striker appearing to foul Laporte.

He added: “I have no idea, I haven’t seen it back. Whatever they decide, they decide. I’m not going to blame that. We should have done better.”