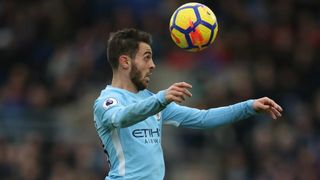 Bernardo Silva believes Pep Guardiola's search for perfection is the key to the Catalan's man-management techniques.

Manchester City are on track for a historic quadruple, enjoying a 12-point lead atop the Premier League and with a place in the EFL Cup final against Arsenal already secured.

City face Cardiff City in the FA Cup fourth round on Sunday and have a favourable last-16 tie against Basel to come in February, but Guardiola has been consistent in his view that challenging for four trophies is unrealistic.

"One of the best things about playing for Pep is that he makes you feel important," Silva told the Mirror.

"It will always happen that some players play more games than others but he makes everyone feel part of the squad, that's why we have such a great atmosphere in the squad.

"The coach is very intense. He goes into the very small details and he gets very close to his players because he wants you to have the confidence to try to play the way he wants.

With strong competition for places at the Etihad Stadium, Silva has been restricted to six Premier League starts.

But the Portugal international accepts the form of team-mates Kevin De Bruyne, Leroy Sane, Raheem Sterling and David Silva make it hard to break into the City team.

"When you come into a new club, you always want to make a big impact," he added. "But I knew that signing for a big club like City meant I would have to fight hard because I would be in a squad with so many great players.

"When I look at the team and the way we have been playing this season, I know I cannot expect the coach to make a lot of changes.

"In the middle Kevin and David are having ­amazing seasons. Then there is Sterling and Sane playing out wide and scoring so many great goals.

"Those players are contributing so much I have realised that I have to be patient and keep doing my work in training. I am still a young player, I still have a lot to learn and I will just keep giving my best contribution to help the team.

"Would I have liked to have played more? Of course. But I am happy in Manchester."