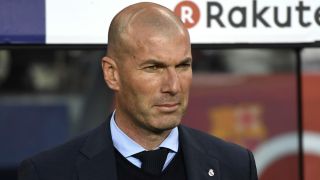 Real Madrid president Florentino Perez admits it came as a huge shock when Zinedine Zidane told him he will be stepping down as head coach.

Zidane confirmed on Thursday he is leaving the club, just five days on from winning his third Champions League in a row, citing the need for "a change" for him and the team.

The 45-year-old's future had come under scrutiny in the weeks leading up to the Champions League final against Liverpool, with Madrid having failed to defend their LaLiga title and crashed out of the Copa del Rey to Leganes.

However, Perez claims he had hoped to have Zidane at his side "forever" and was only informed of the former France star's plans on Wednesday.

"As you can imagine, after winning the Champions League, to hear this decision is completely unexpected," he told a news conference. "It's a sad day for me and it also will be for the fans and players of this club.

"I wanted him as a player and a manager and I wanted him to be next to me forever, but I also know that, when he takes a decision, it's a final decision.

"It was a huge impact for me yesterday when I heard this decision. I would have liked to convince him to stay on but I know what he's like. All I can offer is my love and respect and remind him that this is his home."

Perez remains hopeful that Zidane will return to the club in future, having won nine major trophies since taking over in January 2016.

"Nobody can be prepared for news like this," he said. "When I heard, I went to his house to see if he was prepared and he told me completely seriously that he was convinced.

"I want to thank him for his commitment, his passion, his love, everything he has done for Real Madrid. His behaviour has always been an example for all and he has represented Real Madrid very well.

"I don't want this to be a goodbye, just a 'see you soon'. I've no doubt he will come back but, if he needs to rest, he deserves that."