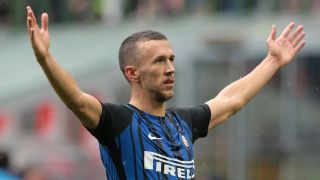 Inter believe they can match the achievements of Manchester United, having resisted interest from the Premier League giants in star attacker Ivan Perisic.

The Croatia international was reportedly the subject of a number of bids from Old Trafford during the transfer window, but Inter held firm and tied Perisic to a new five-year contract after the deadline passed.

Perisic has begun the season in fine form, scoring three goals in five Serie A games as Inter aim for a return to the Champions League picture.

And after a turbulent window in which Neymar joined Paris Saint-Germain for €222million, sporting director Piero Ausilio says clubs will not be able to shock Inter in a similar way as Perisic's deal does not include a buy-out clause.

"Perisic still had a few years on his contract," Ausilio told Sport Mediaset.

"Nobody ever denied that this offer arrived from Manchester United, but we have been working to convince him to stay at Inter and that our project could be just as successful as Manchester.

"The new contract was a consequence of that. There is no release clause because we did not intend to propose one, nor was it requested by his entourage."