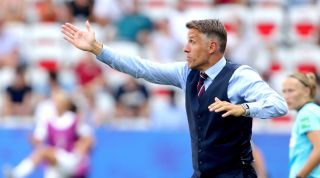 Ellis led the States to a successful World Cup title defence over the summer after overcoming Neville’s Lionesses in the semi-finals.

But she intends to step down from the role, having turned down the chance to lead the team at the Olympics in Tokyo next year.

The Mail Online reports that Ellis will have a say in who replaces her as head coach and she has been impressed by the work of former Manchester United and Everton man Neville.

He is considered the leading candidate for the role but has a contract with the FA until 2021.

Sources in the USA have confirmed to the outlet that Neville appeals to Ellis and other influential figures within the US Federation, but no contact has been made with the 42-year-old or the FA yet.

Neville, who was appointed England boss in January 2018, has been shortlisted in the top three women’s national coaches for 2019 in the FIFA’s Best awards.