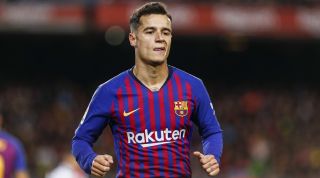 Chelsea will launch a bid to sign Philippe Coutinho if their appeal against a transfer ban is successful, according to Goal.

FIFA upheld a two-window suspension last week after the Blues were found guilty of breaking regulations related to the signing of under-18 foreign players.

However, Chelsea intend to take their case to the Court of Arbitration for Sport in the hope that the ban will be annulled or delayed.

And if the club are permitted to make signings this summer, they will attempt to bring Coutinho back to the Premier League.

The Brazilian has struggled since swapping Liverpool for Barcelona in January 2018, and the La Liga champions will listen to offers for the attacking midfielder.

Coutinho is determined to prove himself at the Camp Nou, but a big-money offer could prove too good for Barcelona to turn down.

Chelsea have identified the 26-year-old as an ideal replacement for Eden Hazard, who will join Real Madrid after the Europa League final.

A 0-0 draw with Leicester on Sunday was enough for Maurizio Sarri's side to seal a third-place finish in the Premier League.