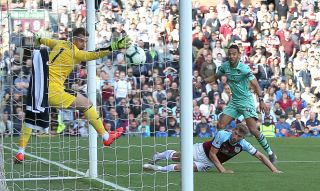 Three days after netting a hat-trick against Valencia to send Arsenal through to the Europa League final, Aubameyang scored in the 52nd and 63rd minutes to take his league tally for the season to 22.

Ashley Barnes reduced the arrears just two minutes after Aubameyang’s second but a last-gasp Eddie Nketiah goal secured Arsenal the three points, which were only enough for fifth place with Tottenham drawing against Everton.

Gunners boss Unai Emery knew the Europa League represents a much better chance to clinch Champions League football for next season and only Aubameyang and Nacho Monreal stayed in the starting line-up from Thursday night.

There was a pleasingly open feel to the game despite a goalless first half.

Burnley goalkeeper Tom Heaton went into referee Mike Dean’s book less than three minutes in after sliding out of his area to challenge Joe Willock and knocking the ball behind with his hand.

Aubameyang attempted to meet the free-kick with his head but the ball bounced off his shoulder and struck the post.

Aubameyang then tested Heaton with a firm shot from a tight angle but it was certainly not all Arsenal, with Barnes first heading wide and then forcing Bernd Leno into a save after Matt Lowton’s ball in had caused panic in the Gunners’ defence.

Barnes was the second player to be shown a yellow card in the 22nd minute. The fiery striker reacted furiously to being barged over by Leno and squared up to Stephan Lichtsteiner, who stepped in as Barnes chased after the keeper.

The visitors’ defence certainly looked far from secure and Chris Wood was unfortunate to see his shot bounce away off the inside of the post after a hopeful long ball left him clean through.

Shortly afterwards a ball from the right caused more chaos and, after Dwight McNeil was denied by Matteo Guendouzi, Lowton picked up the ball with the goal gaping but Shkodran Mustafi pulled off a goal-saving block.

The only real casualty of the incident was Konstantinos Mavropanos, who had to be replaced by Laurent Koscielny.

Nineteen-year-old Willock, making his first Premier League start of the season, curled a shot just wide as the first half drew to a close.

Burnley have been uncharacteristically sloppy at the back this season and it was another poor error that presented the opener to Aubameyang.

Jack Cork misjudged a pass back to Ben Mee, the ball skipped off his toe straight to the Arsenal striker and he gave Heaton no chance with a cool finish.

Aubameyang was just about the only man on the pitch with something to play for, and he made it six goals in eight days and 31 for the season by thumping in Alex Iwobi’s cross to double the lead.

Burnley boss Sean Dyche reacted by sending on Johann Berg Gudmundsson for McNeil and the Icelander engineered an immediate response, first seeing a shot palmed away by Leno and then crossing for Barnes to head in after Arsenal failed to clear.

Aubameyang should have completed his hat-trick in the 73rd minute as he slid in to meet Henrikh Mkhitaryan’s cross but he could only poke the ball wide.

Peter Crouch came on in the 77th minute for his first appearance since appendix surgery in March. With his short-term deal ending, the striker will have talks over his future imminently.

The final act of the game was a third goal for Arsenal as Nketiah’s cross-shot went in off Heaton’s foot to secure a 10th straight win over Burnley for the Gunners.