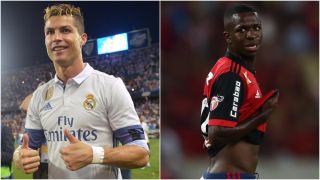 New Real Madrid signing Vinicius Junior says the prospect of playing alongside Cristiano Ronaldo is yet to sink in.

The 16-year-old Flamengo star sealed an astonishing move to Madrid, reportedly worth €45million, on Tuesday.

Vinicius will be a Madrid player from July 2018 after he has turned 18, but the Spanish champions plan for him to stay at Flamengo for a further year unless both clubs agree otherwise.

The eventual prospect of linking up with Ronaldo, the favourite to win this year's Ballon d'Or and retain the game's most prestigious individual prize, is something Vinicius is still coming to terms with.

"It still hasn't sunk in," Vinicius said to Fox Sports when asked about the Portuguese superstar.

"I really like Cristiano Ronaldo and [Gareth] Bale, but for now I think about playing in Flamengo with Diego and [Jose Paolo] Guerrero.

"It was not me that decided anything, it was my representatives together with Flamengo and my parents.

"I'm happy with reaching the objective, but now is about going step by step to win many titles with the Flamengo shirt. Then I will think about Real Madrid. I only think about arriving there with a clear head and still have to spend more time at Flamengo, from one to two years, to mature.

"I am not thinking about money, just playing and giving joy to the Rubro-Negro nation. I am very happy with the transfer, but my head is not in Real Madrid, only in Flamengo."

The teenager has impressed for Brazil at youth level, topping the scoring charts with seven goals as his country won the South American Under-17 Championship in March.

Vinicius only made his first-team debut for Flamengo as a late substitute in the 1-1 Campeonato Brasileiro draw against Atletico Mineiro on May 13.