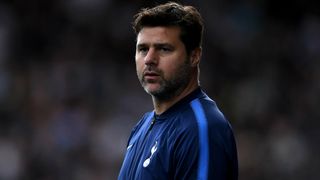 Tottenham boss Mauricio Pochettino admits he would love to stay "for 10 or 15 years" and bring trophies to the Premier League club.

Chairman Daniel Levy was quoted as saying in a forthcoming book that he would like Pochettino to be in charge for at least another decade.

The former Argentina defender has won admirers across the continent for the way he has turned Spurs into a force to be reckoned with since taking over in 2014, while the construction of a new state-of-the-art stadium has encouraged further optimism around the club's fortunes.

Speaking ahead of his side's huge Champions League clash with titleholders Real Madrid at the Santiago Bernabeu, Pochettino said he would be delighted to stay at the club for as long as Levy wants him.

"It's up to the owner and the chairman," he told a news conference.

"I am so happy. I enjoy my time in Tottenham a lot. It's a club with a lot of potential. We are waiting for a new stadium, with new facilities, that I think will be the best in Europe. It's only a matter of time to develop to be a competitive team and try to win a trophy.

"I am happy to hear that Daniel is so kind to me, telling everyone what he expects from me. I hope to stay 10 or 15 years here. I would love to sign that contract."