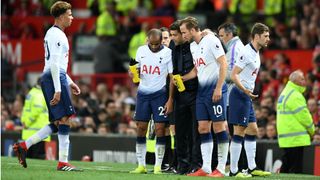 Mauricio Pochettino will not deny the wishes of any want-away Tottenham players if they are not fully committed to the club.

Mousa Dembele, Danny Rose and Toby Alderweireld were among the starters at Old Trafford, after all three were linked with moves away from the club - the latter two heavily reported to be drawing interest from United.

However, even though the trio have stayed put, Pochettino reiterated that he will not attempt to convince players who are not committed to Tottenham's cause to remain at the club.

"It is so exciting."Mauricio reacts to drawing in the group stage.31 August 2018

"I am not a person who is going to convince players to stay or not stay," Pochettino told a news conference.

Tottenham face Watford on Sunday, as Pochettino's side go up against another to have won their opening three Premier League fixtures.