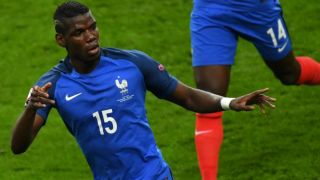 Ryan Giggs has given a huge endorsement for Manchester United transfer target Paul Pogba, just days after departing the club to pursue a career in management.

Giggs' departure from the club he spent the last 29 years at was confirmed on Saturday, but he would be happy to see Pogba return after the Frenchman's departure on a free in 2012 to sign for Juventus.

Bringing Pogba back would be an expensive exercise for United but with money seemingly of little concern, Jose Mourinho could be tempted to spend around the £100million on the 23-year-old, who scored in France's 5-2 quarter-final win over Iceland at Euro 2016 on Sunday.

Giggs said Pogba had "everything", suggesting he would be a big signing for his old club.

United face an uphill battle to sign the Frenchman, with his agent previously commenting that Real Madrid were leading in the race for Pogba's signature.