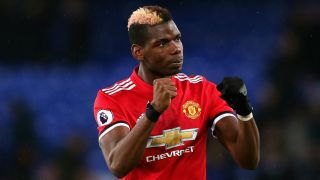 Paul Pogba hailed Manchester United's collective performance after they woke up from their recent blip to beat Everton 2-0 on Monday.

Anthony Martial and Jesse Lingard scored sublime goals at Goodison Park as Jose Mourinho's men won for the first time in five games in all competitions.

United had fallen 15 points off the pace of neighbours City in that timeframe, with their title hopes seemingly up in smoke.

Pogba, United's captain in the absence of Michael Carrick and Antonio Valencia, was suitably delighted with the side's approach after a frustrating festive programme.

35 – Manchester United have won more games against Everton than any other team has won against a single opponent in the competition (35). Devilish.January 1, 2018

"First game of the year, a good win, 2-0," he told Sky Sports. "We had chances today, we played aggressive but in a positive way, creating chances. Defensively we were very good, a very good team performance today.

"We were pushing. We were talking at half-time, we knew we could score and we did it. We believe in ourselves, we just had to wake up and today I think we did.

"I think we deserved to win against Leicester [City, a 2-2 draw] against Southampton [a 0-0 draw], but this is football and today I think we did what we had to do."

Lingard's goal capped the result, the England international drifting into shooting range and finding the top-right corner from 25 yards.

With seven goals in his last nine league games, Lingard has become a key figure for Mourinho and he is keen to keep up his form.

"I think within myself I'm pushing myself and trying to get as many goals as I can this season and help the team win games," he said.

"I played on the left today and it kind of give me a licence to go inside and get on the ball and create.

"It's up there [one of his best goals]. It's always nice to score if it's a tap in or a great goal so I'll take any.

"We're only halfway through the season we've got to approach every game with the right mentality the winning mentality and hopefully we'll come out on top."