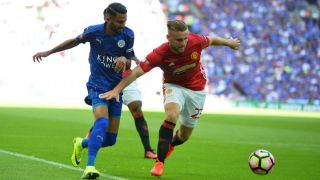 Luke Shaw says Manchester United's players were helped to Community Shield victory by the news Paul Pogba was set to join them.

Confirmation that the Juventus midfielder was to undergo a medical with United came in the hours before kick-off at Wembley on Sunday, with Jose Mourinho's side going on to beat Leicester City 2-1 and claim the first silverware of the new season.

Shaw picked up the first winner's medal of his career as a result and thinks Pogba's impending arrival spurred the players on.

The defender welcomed United's move for Pogba and hopes the world-record deal will lead to further trophies.

Shaw told MUTV: "After seeing that [Pogba's medical] there was a good mood around the squad.

"It is another player to fit in our strong squad, there will be people fighting for places now and that is what you need at a top club like Man United to push us all on to win more trophies like this.

"I was sat on the bench and someone said 'it has got to be the big man' and he delivered," added the 21-year-old.

"He has got so much confidence in his own play so it didn't surprise me that he was the one that fired us to victory."

United open their Premier League season away at Bournemouth on Sunday.