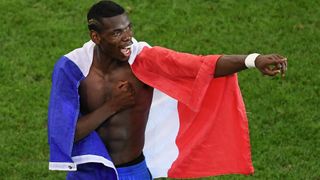 Manchester United target Paul Pogba would be a "perfect fit" for the Premier League giants, according to former midfielder Paul Ince.

France and Juventus star Pogba has been heavily linked with a big-money return to United, with the club lining up a reported €120million bid.

The 23-year-old left Old Trafford just four years ago after not renewing his contract under Alex Ferguson, going on to win four successive Serie A titles in Turin.

But with new United manager Jose Mourinho reportedly keen to land the highly-rated midfielder at any cost, Ince believes he would have no trouble adapting to the Portuguese's style of play.

"Alex Ferguson would have been disappointed to have lost him at such a young age," Ince, who played for United between 1989 and 1995, told Sky Sports.

"But I think his style of football will suit the Premier League more than the Spanish league.

"I remember when I first went to Inter in Serie A and I was that kind of aggressive player and every time I made a tackle I was getting booked, that was frustrating.

"So Pogba now coming into a league where it is tough, where he can show what he's all about, I think is a perfect fit for him and for Man United.

"Who he plays alongside, whether it's [Michael] Carrick, [Morgan] Schneiderlin or [Bastian] Schweinsteiger - I don't know.

"But if United can get Pogba then that sends out the signal that we are really going for it this year."