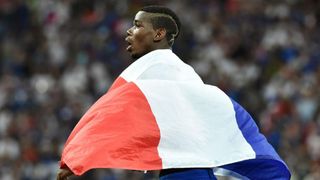 For the best part of 45 minutes at the Stade de France on Saturday, France captain Hugo Lloris, defender Bacary Sagna and coach Didier Deschamps spoke eloquently about the hopes and expectations of a passionate home nation ahead of the Euro 2016 final.

Similarly, Portugal defender Pepe and coach Fernando Santos respected France's status as favourites but talked with a quiet, unflinching confidence over their own side's prospects.

French sports daily L'Equipe featured Ronaldo and Griezmann on its front page, with the headline "A Armes Egales" (with equal weapons) - pitting the Ballon d'Or freshman up against the man who would be king again.

Absent from lengthy media conferences and newspaper editions was, in spoken word or print, the name of Paul Pogba.

For a man linked heavily with being the world's first £100million footballer on the eve of participating in a major final in his homeland, it was a curious position for Pogba to take up. Such heady transfer talk means he should be nothing but a main attraction.

But while his representatives, Juventus, Manchester United and Real Madrid reportedly haggle over how the finer details of an obscene fortune might be distributed, we are left to ponder the supreme talent that found himself pitched as the supporting actor in his hometown drama.

Euro 2016 began ponderously for the 23-year-old and he was not the only one to suffer from first-night nerves. In fact, had Dimitri Payet not considered a fraught 2-1 win over Romania akin to his own personal showboating session at West Ham's training ground, this strident Les Bleus adventure might have remained rooted to the spot.

Pogba started on the bench versus Albania, came on to set up Payet's clincher in a 2-0 win and celebrated gesturing - euphorically or aggressively, depending on your interpretation - towards the press box. Against Switzerland, in a stylish 0-0 dead rubber, Pogba shone to the extent that a 90 minutes almost entirely lacking in substance would allow.

The last-16 clash with the Republic of Ireland provided both the low ebb and the rebirth of Pogba at Euro 2016.

Clumsily, all pumping and imposing limbs, he conceded an early penalty. Robbie Brady converted and Ireland's advantage remained at halfway, persuading Deschamps to make a change.

Off came the dependable presence of N'Golo Kante in holding midfield, with Pogba dropped in alongside Blaise Matuidi and Griezmann allowed to menacingly roam centrally behind striker Olivier Giroud.

Pogba, having been edged towards the attacking role his status demanded, could now see the whole picture unfolding before his vast capabilities.

3 - Will follow former player Platini and Zidane winning the for ? Heritage. July 9, 2016

Griezmann's brace had France ahead shortly after the hour and Pogba finished the contest with the highest number of touches and passes made, along with duels won.

He headed a first goal of the tournament against Iceland in the quarter-final before spearing a pass towards Griezmann for a picture-book fourth in a 5-2 win.

With Germany in the opposite corner, Pogba toiled for long periods - not shy of the dirty work required against the world champions and masters of possession.

Around the Stade de France press room, local journalists bridled at lazy comparisons with ex-Juventus greats Michel Platini and Zinedine Zidane: Pogba is a number six - a comparative artisan to those artists at number 10.

But maybe, in this tournament where inspired collectives such as Iceland and Wales have aimed their sling shots between the eyes of giants, Pogba's role as a prompter and a prober who makes those in front of him perform is worthy of credit. Griezmann had one goal to his name before the Juve star sat deeper and expertly surveyed the options.

Of course, Zidane served a two-match ban for trampling unceremoniously on Saudi Arabia's Fuad Anwar before netting his iconic brace in France's 3-0 1998 World Cup final triumph over Brazil on the field Deschamps - then captain - and his players will evocatively tread on Sunday.

Pogba has the capacity to match the latter feat. If not, his bare-chested euphoria upon overcoming Germany showed he is happy to be a supreme cog functioning effectively amid Deschamps' bleu machine.