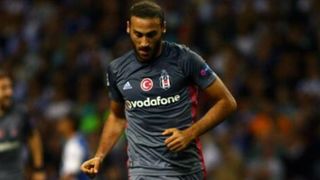 Besiktas started their quest to qualify for the knockout stages of the Champions League in fine style as they claimed a surprise 3-1 win at Porto on Wednesday.

The Super Lig champions have never gone beyond the group stages of Europe's premier club competition in its modern guise, but made their ambitions clear this close-season by bringing in the likes of Pepe, Gary Medel and Alvaro Negredo.

Anderson Talisca, on loan from Porto's Primeira Liga rivals Benfica, will have drawn further ire from the home fans when he headed Besiktas in front in the 13th minute.

Porto levelled eight minutes later through Dusko Tosic's own goal but Tosun quickly hit back in the 28th minute.

Former Real Madrid goalkeeper Iker Casillas managed to let Tosun's effort evade his grasp, and he was equally at fault as Ryan Babel scored Besiktas' third goal of a victory that moves them two points clear at the top after RB Leipzig and Monaco drew 1-1.

Besiktas had the better of an open start to proceedings and Babel saw a curling effort deflected over the crossbar before Talisca broke the deadlock.

The Brazilian timed his run into the box perfectly to meet Ricardo Quaresma's right-wing cross and power a close-range header beyond Casillas.

Porto responded well and Oliver Torres hit the post at the end of an attack started by a magnificent long ball from Casillas.

And the hosts were gifted an equaliser two minutes later as Tocic headed Alex Telles' corner from the left in at the near post.

Jesus Manuel Corona then had a tame effort from a tight angle kept out by Fabri as Porto looked to complete the turnaround.

But they instead fell behind once more, with Casillas at fault as Besiktas retook the lead.

Tosun let fly with a long-range swerving effort that Casillas failed to keep out despite getting a hand to the shot.

Tiquinho Soares curled narrowly wide from 20 yards out as he sought to restore parity once more before Oguzhan Ozyakup slipped and fired wide after finding himself in space in the box.

Porto made a double change before the start of the second half as Otavio and Andre Andre were brought on for Torres and Corona.

And they increased the pressure on the Besiktas goal as Tiquinho latched on to a Yacine Brahimi throughball only to be denied by Fabri, before Ivan Marcano had a goal-bound header blocked on the line.

Besiktas weathered that storm, though, and the visitors added late gloss to the scoreline as another Casillas error allowed Babel to make the game safe by finding the bottom-left corner.