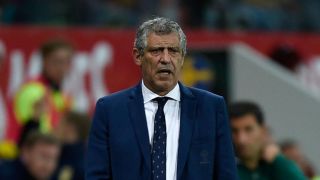 Portugal coach Fernando Santos was delighted by his side's determined and smart display in their 3-0 win over Latvia in World Cup qualifying.

Cristiano Ronaldo - fresh from leading LaLiga giants Real Madrid to Champions League glory - was in inspired form for his country on Friday, netting twice and setting up another as Portugal ultimately eased to victory.

It keeps Euro 2016 winners Portugal within touching distance of group leaders Switzerland, while also providing Santos' side with the ideal preparation heading into the Confederations Cup.

"The merit of this Portugal team is that they knew how to overcome these difficulties with their heads and determination," Santos told RTP.

"We knew they would press us and look to counter-attack. In the opening 20 minutes we tried to break them down.

"Scoring the first was essential. In the second half, we made adjustments. We grew as the game went on, moving the ball better and quicker."

Ronaldo opened the scoring shortly before half time in Riga, nodding in from close range after two fine saves from Andris Vanins had previously denied the front man.

And Silva, who has cemented his place in Santos' squad following an impressive campaign with Porto, claims that Ronaldo's presence makes leading Portugal's line simple.

"We understand each other well on the pitch, and with players of this quality it's easier to score," the 21-year-old said.

"Thanks to the training we do we have achieved these results and these goals.

"We came here to win the game and to add three more points, that's what we were looking for and I'm happy to leave here with one more goal."