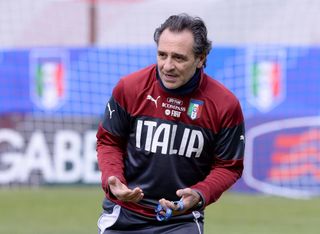 Prandelli's spell as manager of the national team has been clouded in controversy after he introduced a code of ethics.

The rules prevent players from national team selection if they misbehave at club level, and has already seen key midfielder Daniele De Rossi miss Italy's friendly against Spain last month after receiving a three-match ban for an incident during Roma's Serie A clash with Inter.

And speaking to FIFA Weekly, Prandelli says he has no intention of backing down from his demands ahead of Brazil 2014.

"I want players who feel honoured to wear the Azzurri shirt, because you have to win not only with technique but also with behaviour," said Prandelli, who will oversee Italy's Group D matches against England, Uruguay and Costa Rica.

"Someone who spits in the face of a rival or repeatedly simulates does not deserve to be called, regardless of how they play.

"De Rossi? I do not believe he will lose his character. Nobody has complained, not even Daniele, only a few coaches.

"I do not like arrogance and the fact is that so many take it too seriously. In my day it was not so, and if we lost, the next day you did not leave your home in shame.

"We felt lucky to have so much at 20-years-old. We had easier lives."

Prandelli's comments come after he criticised the team's fitness levels following their 1-0 defeat to Spain.