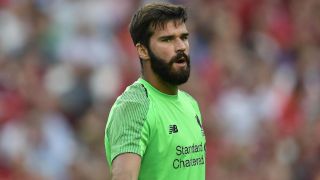 It has become an annual pre-season discussion: could this finally be Liverpool’s year?

There have been near-misses since – most notably when Brendan Rodgers’ side 'let it slip' with the title tantalisingly close – but optimism has rarely been as high as it has at Anfield in the lead up to the new campaign.

Since Jurgen Klopp's men made May's Champions League final and finished fourth in the Premier League, the Reds have splurged in the region of £160million on Fabinho, Naby Keita, Xherdan Shaqiri and Alisson. Maybe this really could be their year.

The biggest issue Liverpool needed resolving this summer was sorted at a then world-record cost - one that could rise to £65million.

5 - kept the clean sheet in five of his six home games played in the 2017-18 Champions League for AS Roma, conceding goals in only one match, in May against Liverpool. Safety. July 17, 2018

It always seemed likely Klopp would seek a new goalkeeper following the Champions League final gaffes made by Loris Karius, who, tests later revealed, had suffered a concussion in the game.

Manchester City provided evidence of how important a top keeper is when they replaced Claudio Bravo with Ederson. Alisson kept Ederson out of the Brazil side at the World Cup and could be a key acquisition given the other title contenders have elite goalkeepers.

Liverpool did not miss a beat when Philippe Coutinho joined Barcelona in January as Mohamed Salah, Roberto Firmino and Sadio Mane all stepped up in his absence.

However, if there is one thing Liverpool may still be missing, it is a replacement for Barca's Brazilian. Fabinho and Keita should offer Klopp the drive he craves in midfield but they cannot replicate Coutinho's guile.

If teams set up to frustrate Liverpool, who is going to unlock the defence as Coutinho used to?

For the first time since Luis Suarez, Raheem Sterling and Steven Gerrard were wearing red, there is a level of expectation around Liverpool.

It is something both Klopp and his squad must handle. And for all the plaudits that have been directed at him during his time in England, Klopp is still yet to bring a trophy to the Anfield cabinet.

His terrible record in cup finals – seven games, one victory – is well known but he does have experience of winning league titles, doing so twice with Borussia Dortmund.

Centurions City still the ones to catch

What an end to last seasonWill pick up where they left off? August 8, 2018

Liverpool’s title bid does not just depend on how they fare. If Manchester City are to repeat last year's record-breaking campaign, no one will come close to denying Pep Guardiola's side the trophy.

City finished with 100 points last term - a whopping 25 clear of Klopp's side – and there would need to be a significant drop off from the champions for Liverpool to finish ahead of them this term.

Yet with Chelsea and Arsenal undergoing managerial changes and transitioning from one era to the next, and Manchester United and Tottenham failing to greatly strengthen in the transfer market, it would appear Liverpool are the team best equipped to challenge City.