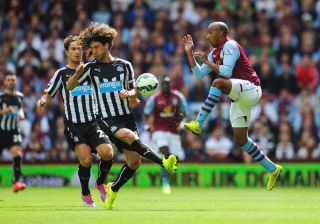 Newcastle had failed to muster a shot on target as they opened their Premier League season in defeat to Manchester City last weekend, and Alan Pardew's men once again struggled to create many clear chances in a first half bereft of incisive play.

Villa had been happy to sit deep and break on their opponents, and Newcastle noticeably pushed on after half-time, although their best openings fell to right-back Daryl Janmaat, who was unable to open his account for the club.

Pardew's side came into the contest with form against Villa and, though they extended their unbeaten run against the Birmingham club to seven, a lack of cutting edge will have frustrated the Newcastle manager.

Mike Williamson was shown a second yellow card in stoppage time, but it failed to inspire Villa into a late charge and they ended the game without a shot on target, with swathes of empty seats for the club's first home fixture of the season hinting at a discontent among supporters.

With home form having been an issue for Villa in 2013-14, they began with a counter-attacking approach often deployed in away games.

While that limited their possession, the pace of Charles N'Zogbia, playing his first game at Villa Park since April 2013, looked a threat on the counter - the Frenchman having the first sight of goal 18 minutes in as he curled a 20-yard free-kick wide.

Despite seeing plenty of the ball, Newcastle struggled to penetrate Villa's backline, though Remy Cabella once again looked impressive after an eye-catching debut against City.

First, the France playmaker slipped Emmanuel Riviere into the left channel, but a narrow shot was comfortable for Brad Guzan low to his left. And more Cabella creativity opened up space for Vurnon Anita, but the Dutchman's effort lifted high and wide.

Newcastle looked much more dangerous after the interval, with their defenders going closest.

Janmaat twice troubled Guzan in the half's opening 10 minutes, forcing the American to tip a stooping header over before fizzing a left-footed drive just off target.

Williamson completely missed the ball after Cabella's right-wing corner as a Newcastle goal looked to be imminent.

Paul Lambert replaced N'Zogbia with debutant Carlos Sanchez in the search for more control in midfield, while Siem de Jong was introduced as Newcastle looked to bolster their attacking numbers.

Darren Bent was afforded a warm reception as he was reintroduced to the Villa fans after a season away from the club on loan at Fulham, but the England man's presence did little to boost the home side.

De Jong had a gilt-edged chance to snatch the game in the closing stages, but Guzan denied the Dutchman one-on-one and Newcastle had to settle for their first point of the season, despite Williamson's dismissal in stoppage time.