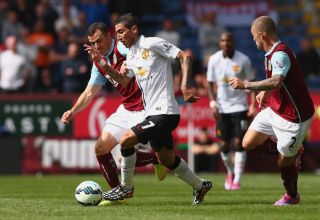 Louis van Gaal was able to field Angel di Maria for the first time following his £59.7 million move from Real Madrid, but United failed to impress once again despite occasional flashes of brilliance from British football's most expensive signing.

Having failed to beat Swansea City or Sunderland prior to a midweek League Cup humbling at the hands of MK Dons, Van Gaal's men produced another disjointed display and could have few complaints with the result despite being denied a late penalty when substitute Ashley Barnes appeared to handle a shot from Ashley Young.

Indeed, Burnley had opportunities to emulate the 1-0 victory they memorably secured when the sides last met at Turf Moor in August 2009, with David Jones coming the closest to a goal when striking the crossbar early on.

Sean Dyche's side will surely take heart from claiming a first Premier League point of the season, following defeats to Chelsea and Swansea.

By contrast, United's performance - on a day that the club agreed a deal to bring in Netherlands international Daley Blind from Ajax - is likely to heighten concerns at Old Trafford.

An unchanged Burnley came roaring out of the blocks and twice came close to punishing defensive errors in the opening five minutes.

David de Gea was well-beaten on that occasion, but the goalkeeper made an important stop to deny Jutkiewicz within 60 seconds following a sloppy backpass from Jonny Evans, who struggled badly in Tuesday's shock 4-0 loss at MK Dons.

The injury-hit visitors - still without Marcos Rojo as the defender awaits a work permit - gradually settled, with Di Maria offering early glimpses of his talent.

A wonderful ball over the top from the Argentinian led to Robin van Persie being superbly denied by Tom Heaton, who stayed big to keep out a shot across goal.

Di Maria, who replaced Tom Cleverley in United's starting XI, then played a glorious pass on the spin during another attack that ended with Juan Mata slipping as he looked to shoot.

However, after soaking up some pressure Burnley soon threatened again, with Scott Arfield heading wide from a Jutkiewicz cross and the lively David Jones testing De Gea with a powerful half-volley.

Young saw an appeal for a spot-kick waved away before the break, having gone down under a challenge from Kieran Trippier.

The second half started slowly, but Dean Marney was forced to clear a Van Persie shot off the line in the 59th minute following more good work from Di Maria.

Van Persie nodded a Darren Fletcher cross over the bar two minutes later, while Matt Taylor should have done better at the other end as he shot tamely at De Gea.

Di Maria and Van Persie were withdrawn in quick succession thereafter and United were unable to find a breakthrough despite penning their opponents back in the closing stages, with Barnes seemingly lucky not to be penalised for blocking Young's shot with his arm.