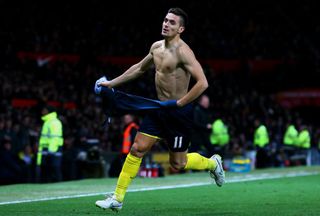 After the hosts had enjoyed the majority of possession in Sunday's encounter, albeit wasting the scarce few chances they created, Tadic netted 69 minutes in as United lost at home in the Premier League for the first time since the opening day.

The former Twente man calmly sidefooted home from inside the area as Ronald Koeman's men leapfrogged United into third.

Robin van Persie and Angel di Maria had threatened in a dour first half, but the home side never looked incisive enough to take maximum points.

United flattered to deceive in spells after the break as well, with Tadic on hand to make them pay - slotting home after Graziano Pelle's effort rebounded off the post.

Koeman - widely documented to have a frosty relationship with opposite number Louis van Gaal following disagreements during their time at Barcelona and Ajax - saw his side avenge their 2-1 defeat when the teams met at St Mary's Stadium last month.

The injury-enforced withdrawal of Toby Alderweireld was the only low point for the south-coast club, while Van Gaal has work to do to rediscover his side's finishing touch if they are to regain third place.

Nathaniel Clyne - back in Southampton's starting XI for the first time since Boxing Day - went close inside two minutes as he dragged a shot wide before Di Maria's inviting cross failed to elicit a touch from any United team-mates.

Like Clyne, Alderweireld was also returning for the visitors, having not featured in the FA Cup draw with Ipswich Town, but the Belgian was forced off injured inside 20 minutes and replaced by Florin Gardos.

While the opening half hour was largely devoid of clear-cut chances, United ended the first period on top.

Van Persie played in Di Maria with a clever looped ball, but the former Real Madrid man miscontrolled, before the Dutchman saw an effort inside the area collected by Fraser Forster following a deflection off Gardos.

A tame, wayward effort from Di Maria - starting for United for the first time since November following injury troubles - proved the final chance of a low-key half in which neither side mustered an attempt on target.

The second half continued in much the same vein as the first, with United labouring up front against a resolute Southampton back line.

Without Radamel Falcao - scorer of two of United's last five Premier League goals prior to Sunday's clash and who failed to gain a place in the matchday squad - the likes of Di Maria, Van Persie and Wayne Rooney struggled.

Chances continued to be at a premium for both sides, but crucially Southampton took theirs with the help of some calm finishing from Tadic before Juan Mata failed to make the most of two clear opportunities.

Attacking midfielder Tadic's goal - which followed up his effort in the 2-0 victory over Arsenal on New Year's Day - proved the difference as Southampton moved into third, two points clear of United, who have now won just one of their last five league matches.