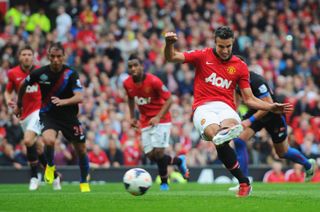 United went into the game on the back of a disappointing 1-0 loss to rivals Liverpool prior to the international break, with Moyes yet to taste victory at Old Trafford in his entire management career.

Moyes moved to improve his squad on the final day of the transfer window, bringing in Marouane Fellaini from former club Everton. The Belgian did not feature until midway through the second half, but his presence proved to be little more than a footnote in a comfortable win for United, talisman Robin van Persie scoring from the spot before the returning Wayne Rooney found the net with a free-kick.

Rooney was named in the starting XI, the forward sporting protective headgear after sustaining a head wound that kept him out of England duty.

Fellaini was left on the bench, while Fabio, Antonio Valencia and Anderson all came into the side.

Palace made just one change to the team that beat Sunderland 3-1 prior to the international break, deadline-day signing Adrian Mariappa replacing Joel Ward.

The hosts made the better start to proceedings and had the first chance to take the lead when Michael Carrick stung the palms of Julian Speroni with a long-range drive.

However, despite the clear gulf in quality, United were unable to exert any real dominance, with Ian Holloway's men competing well in the middle of the park.

Predictably it was Van Persie who was on the end of the first clear opportunity of the game, but the Dutchman shot wide at the near post after good work from Patrice Evra.

The Netherlands international came close to atoning for that miss seven minutes before the break, the former Arsenal man crashing a vicious volley against the crossbar after he had shown superb control to collect a wonderful long ball from Rooney.

Yet it was Palace who could have headed into the break with the lead, Marcus Gayle shooting wide of the far post after displaying a great burst of pace to get past Rio Ferdinand down the left-hand side.

Holloway's men suffered a devastating blow right before half-time, though, as Kagisho Dikgacoi gave away a penalty for bringing down Ashley Young just inside the area.

The South African was dismissed by referee Jon Moss in the immediate aftermath, before Van Persie tucked the resulting spot-kick into the bottom corner to give Moyes' side the lead.

United continued in the ascendancy early in the second half, Speroni producing a fine reaction save to deny Young after he had been put through by Anderson.

Young was at the heart of every United attack and he went close again 10 minutes into the second period, curling a shot wide from the edge of the area.

Palace offered nothing as an attacking force in the second period, and United were unfortunate not to add a second, Van Persie flashing a curling effort inches over the bar, before Speroni displayed yet more heroics to prevent Rooney from finding the net.

The London club's fading resistance was broken for a second time 10 minutes before the final whistle, Rooney marking his return with a superb free-kick that found the bottom corner to end any slim hopes Palace had of gaining a point.