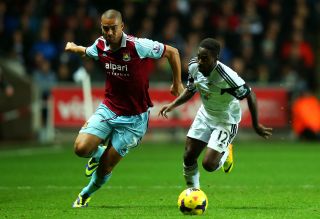 Sam Allardyce's side were looking for back-to-back away wins after a stunning 3-0 success at Tottenham earlier this month, and caused the home defence no end of trouble from set pieces on Sunday.

But their profligacy, combined with resolute Swansea defending, ensured both sides would share the spoils in Wales.

Ravel Morrison and Guy Demel were guilty of wasting great chances to give West Ham the lead in the first half.

Michael Laudrup's men improved after the break, and substitute Wilfried Bony nearly stole the points for the home side but was denied by a terrific reaction stop from West Ham goalkeeper Jussi Jaaskelainen.

The result means Swansea have failed to win back-to-back Premier League matches in 2013.

Swansea were boosted by the return of captain Ashley Williams, making his first appearance in more than a month after suffering an ankle injury, while West Ham were unchanged from the side that lost 3-1 to Manchester City last week.

West Ham made a lively opening and Stewart Downing's low drive forced Swansea goalkeeper Michel Vorm into a save at his near post after he cut in from the right.

The home side had a great chance to open the scoring on 16 minutes, but Chico Flores' header was powered straight at Jaaskelainen from Jonathan de Guzman's corner.

The chance boosted the visitors, who then enjoyed a repeated spell of corners, with Demel going closest when unmarked, he headed over from close range.

West Ham were dealt a blow in the 34th minute when Vaz Te left the field with a wrist injury, to be replaced by Matt Jarvis, but they finished the first half strongly in a display that would have given Allardyce confidence.

Swansea looked to press higher up in the pitch in the second half and Spanish forward Alvaro Vazquez was agonisingly close to getting on the end of a Nathan Dyer cross.

Laudrup replaced Vazquez with Bony and he almost made an immediate impact, forcing Jaaskelainen into a superb reflex save from six yards.

Swansea enjoyed an extended spell of pressure in the final 15 minutes of the game, and they had claims for a penalty after Dyer's cross struck Joe Cole, but their protests were denied as both sides settled for a point.