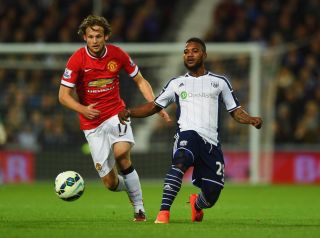 Louis van Gaal's side were heading towards a third defeat in eight Premier League games when the in-form Saido Berahino put West Brom 2-1 up with 24 minutes remaining at The Hawthorns.

However, holding midfielder Blind then emulated Marouane Fellaini by scoring his first goal for United, denying the hosts a notable victory.

West Brom took an early lead through a fine goal from Stephane Sessegnon in a game that provided further evidence of United's defensive fragility.

Fellaini equalised in stunning fashion within three minutes of his introduction at the start of the second half, but Alan Irvine's men moved back ahead against the run of play when Berahino broke clear to grab his sixth league goal of the campaign.

That strike looked set to prove decisive, yet Blind had the final say when he drilled home a shot from the edge of the area late on.

Radamel Falcao was left on the bench by Van Gaal, who handed starts to the fit-again Phil Jones and Ander Herrera in addition to Adnan Januzaj.

West Brom started the brighter and Sessegnon opened the scoring in the eighth minute with a superb first-time finish.

The Benin international met Andre Wisdom's low ball with a curling effort into David de Gea's top left-hand corner, following an excellent run down the right from the on-loan Liverpool full-back, who was included in the West Brom starting XI in place of Cristian Gamboa.

Robin van Persie was then denied by Boaz Myhill - in for the injured Ben Foster - at the other end as United sought an immediate response.

Angel di Maria also tested Myhill on two occasions but United, despite dominating possession for much of the first half, appeared to lack a cutting edge in the final third.

Fellaini was brought on for Herrera after the half-time interval and made an almost immediate impact by controlling a cross from Di Maria with his chest, before swivelling and unleashing an unstoppable drive beyond Myhill and into the top-right corner.

United appeared more likely to grab a second goal thereafter, but were caught short at the back again as Berahino restored Albion's lead.

The England Under-21 international is behind only Manchester City's Sergio Aguero and Chelsea's Diego Costa in the Premier League goalscoring charts and displayed his quality once again, capping an excellent West Brom move with a confident strike into the bottom-right corner from Chris Brunt's incisive pass.

Van Persie struck the post with a vicious half-volley from the edge of the area before Di Maria was withdrawn for Ashley Young due to an injury to his right thigh.

With United's most creative player on the sidelines, West Brom looked set to hold on.

However, there was to be a late final twist as Blind picked the perfect time to open his account and salvage a point, although the nature of United's performance is unlikely to put an end to questions over the Old Trafford club's ability to sustain a title challenge.