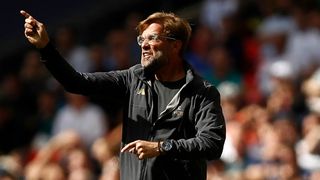 Jurgen Klopp believes Paris Saint-Germain should be favourites to beat Liverpool at Anfield in their Champions League Group C opener, while he was unable to confirm whether or not Roberto Firmino would be fit to face the Ligue 1 holders.

Liverpool's strong start to the season, in which they have won all five of their Premier League matches so far, has led to bookmakers tipping them to have the edge over Thomas Tuchel's side on Tuesday night, but Klopp described the French champions as a team built with the aim of winning the Champions League in mind.

PSG have started the season in emphatic form, scoring 17 goals and conceding just four in their run of five consecutive victories, and Klopp underlined the importance of home advantage to his side against such opponents.

"PSG is one of the favourites for the competition," Klopp told reporters. "How can we be the favourite in that game?

"Everybody knows about the quality of Paris - their team is built for winning the Champions League.

"We play at Anfield and it can be an advantage, we hope. But we need any help we can get."

Klopp: "I like these challenges, but only because I have a really good team. If i wasn't the manager, I would be watching this game." September 17, 2018

Klopp indicated that the eye injury Firmino suffered during Liverpool's 2-1 win over Tottenham on Saturday was not certain to rule him out of the PSG game.

The Brazilian scored Liverpool's second goal before being substituted in the 74th minute after a nasty clash with Jan Vertonghen in which he was poked in the eye.

When asked whether the 26-year-old would recover in time, Klopp said: "Not definitely. If we played today, no chance.

"We all hope there will be a chance tomorrow. Everybody who saw the picture after the game, we were all shocked.

"It's painful, nobody wants to have that, but he will be fine. We don't know exactly when. We will see how it develops."

Should Firmino fail to pass a late fitness test, Klopp made it clear that Daniel Sturridge is one of the players available to step in.

"He [Sturridge] will be ready," said Klopp. "If Bobby [Firmino] can't play, and Dominic Solanke can't, we are short of options because [Solanke and Divock Origi] picked up little injuries with the Under-23s against Swansea.

"There's no problem with the first line-up, only with having options."