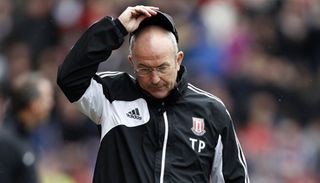 Pulis, who led Stoke into the Premier League and kept them safe among the elite, left the club on Tuesday after seven years in charge.

His abrasive style of football frequently drew criticism from opponents and a disappointing run of results left them 13th in the table and prompted mutterings of discontent from some fans.

Pulis, who guided the club to the 2011 FA Cup final, defended his record of keeping them up despite having "no infrastructure in place to compete with the top Championship clubs we had left behind, never mind the top Premier League clubs."

He said in a statement released through the League Managers' Association: "Although I am disappointed, I do understand what he [the chairman] means when he says the board feels a need to take the club in a different direction.

"In leaving I am very proud of what we have all achieved."

Pulis said his side had created history by "being the only team in this club's 150 years of existence to remain out of the bottom six in top-flight football for five consecutive seasons."

He restored their place among England's elite after a 23-year absence, and bucked expectations to finish 12th in their first season back in the top flight.

The high point of the Pulis reign was reaching the FA Cup final, where they lost to Manchester City, and a venture into the Europa League in 2011/12.

"Overall, the added value Tony has brought to the club is immense and he is to be applauded for a very successful tenure," Richard Bevan, chief executive of the LMA, said.