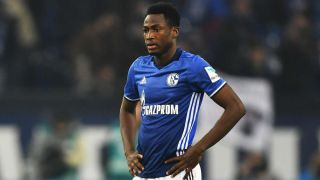 Chelsea have confirmed full-back Baba Rahman has returned to Schalke on loan until the end of next season, as talk gathers of an imminent deal for Emerson Palmieri.

The 23-year-old spent the first half of last season with the Bundesliga club but a knee injury sustained at the Africa Cup of Nations kept him sidelined for the remainder of 2016-17.

The Ghana international's exit comes amid increasing speculation that Roma left-back Emerson will move to Stamford Bridge before the end of the transfer window.

Chelsea have reportedly agreed a fee that could rise to €28million for the Brazilian, who is claimed to be ready to sign a four-and-a-half-year deal.

However, it is rumoured they have ended their interest in striker Edin Dzeko after failing to agree on personal terms.

Antonio Conte's side have also sent Nathan on loan for the remainder of the campaign, with the 21-year-old joining Belenenses in Portugal's top flight.

Baba Rahman has today returned on loan to Schalke until the end of next season...January 29, 2018