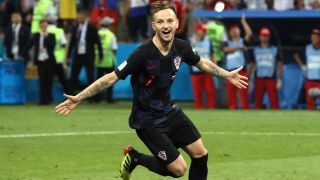 Croatia midfielder Ivan Rakitic is in career-best form at the World Cup, according to coach Zlatko Dalic.

Rakitic has netted the decisive penalty in back-to-back shoot-outs, helping his team beat Denmark and Russia to reach the semi-finals.

Dalic was full of praise for the Barcelona midfielder, saying Rakitic was in career-best form heading into a last-four clash with England on Wednesday.

"In my personal opinion, I think this is the best he's playing for the Croatian national team. It's just a continuation of a great season that he had at Barcelona," he said.

"He means a lot to the whole team and I think that Luka [Modric] and Ivan together are the best midfielders at this tournament and hopefully they will continue in the same manner.

Need a guy to score a winner in a penalty shoot-out?Ivan Rakitic is your man! July 7, 2018

"Not only is he playing well throughout the match, but he is showing great confidence about him which he proved with two decisive penalties in the round of 16 and the quarter-finals.

"And I think this is the best he's been playing throughout his whole career."

Rakitic also scored in Croatia's group-stage win over Argentina, with the nation reaching the World Cup semi-finals for the first time since 1998.