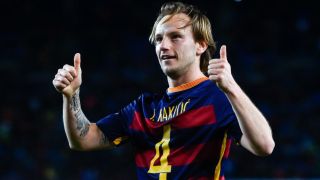 Ivan Rakitic has dismissed suggestions he could leave Barcelona following the arrival of Andre Gomes from Valencia.

Miquel Sors, who was believed to be one of the Croatia international's representatives, fuelled speculation that Rakitic could leave Camp Nou earlier on Friday with a cryptic tweet saying "It's time to go" after Barcelona's announcement that they had reached an agreement to sign Gomes.

However, Rakitic has made it clear he is focused on the 2016-17 campaign with Barcelona, stressing Sors is not his agent.

"Getting ready for the new season and really up for it," the 28-year-old tweeted alongside a picture of him in the gym.

"By the way, my only agent is Arturo Canales."

Getting ready for the new season and really up for it. By the way, my only agent is Arturo Canales July 22, 2016

Rakitic joined Barcelona from Sevilla in 2014 and has since developed into a key figure at the Catalans, helping them to the treble in his first season and the domestic double in 2015-16.