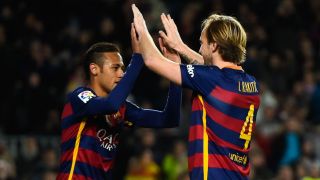 Barcelona midfielder Ivan Rakitic has opened up about the bitter blow of losing Neymar to Paris Saint-Germain.

Neymar became the most expensive player of all time when PSG triggered the Brazil star's €222million release clause to sign him in August.

It represented a stunning coup for the Ligue 1 side, but left Rakitic lamenting the loss of a star team-mate and close friend.

"I'm not going to lie to you, I would prefer that Ney was here with us," the Croatia international told Marca.

"Apart from being a great player, he is a friend and I am very fond of him.

"After that, we have to continue. Barcelona is not one, two or five players. It is the biggest club in the world and we have to keep working.

"It would seem better to be able to count on him, but if he is not there, we join forces to be even better."

In Neymar's absence, Ernesto Valverde's side have ascended to the summit of LaLiga, where they enjoy a nine-point lead.

The Camp Nou club have also reached the last 16 of the Champions League.