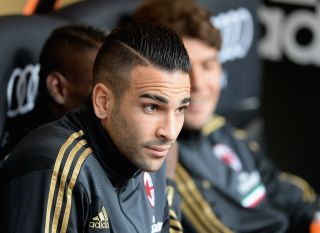 Valencia loanee Rami was unveiled at a press conference in Milan on Friday, having completed his temporary switch in the current transfer window.

The France international, who has 26 caps for his country, is focused on having a positive spell with Milan in a bid to be selected by Didier Deschamps for the World Cup.

"Should I play well here, I hope to go to the World Cup but you have to go step by step. Now I just think about Milan," he said.

"It's a fantastic club with tradition. I just want to work a lot and repay the faith.

"Of course I think of the French national team. Milan is one of the most important clubs in the world and I think if I work hard and earn my place, of course I can aspire to the national side."

Milan's vice-executive president and CEO Adriano Galliani added that he was delighted to be able to secure Rami's services as part of a deal that includes an option to sign him permanently at the end of his loan spell.

Galliani also explained his preference for bringing players in from overseas after Keisuke Honda arrived from CSKA Moscow earlier this week.

"We monitored the situation in Europe and as soon as we saw a glimmer of hope we arrived first," he said.

"There are many deals abroad. My phone is not a reliable sample but if I had to pick, for example, I would say that abroad is much more dynamic than the Italian scene."