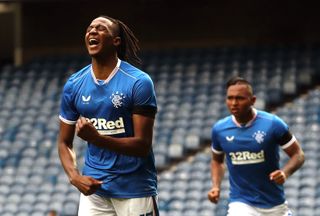 Rangers maintained their blemish-free pre-season record as they rounded off their public workouts with a 2-0 win over Coventry.

Steven Gerrard’s team had scored eight goals without reply to record wins during their run outs against Lyon, Nice and Motherwell.

And they maintained that form ahead of next weekend’s Scottish Premiership curtain-raiser at Pittodrie thanks to goals from Joe Aribo and Connor Goldson.

There was no sign of new signing Leon Balogun but Filip Helander did return for the last half hour as he made his first appearance since injuring his foot in December’s Betfred Cup final.

While Gers will hope they are now up to full speed ahead of facing Aberdeen, this was Coventry’s first game since March.

Mark Robins’ English League One champions are only 10 days into their preparations for the new campaign but it was Gers who looked leggy against the well-organised visitors.

The early signs for Gerrard have been encouraging with his team in slick form during their first three games.

But perhaps the exertions of their gruelling training sessions have taken their toll as there was a distinct lack of energy about the hosts during a sluggish opening half.

Alfredo Morelos’ only goal this summer came from the penalty spot in a closed-door clash with Hamilton and the Colombian has cut an increasingly frustrated figure with each passing game.

Again here he was all flailing arms and petted lips as moves broke down before his team-mates could pick him out.

But he was left cursing himself on 27 minutes as he wasted a good chance, heading well wide from a James Tavernier cross.

Former Kilmarnock midfielder Liam Kelly was also off target with a header for Coventry before the Sky Blues skipper Declan Drysdale came up with two vital blocks to deny Morelos and Ryan Jack.

Robins’ team had the ball in the net on the stroke of half-time as a swift counter attack saw Matt Godeen finish off from a Jordan Shipley cross but linesman Frank Connor’s flag was already up by the time his finish hit the net.

The interval came at the right time for Rangers and having come back refreshed, they pounced within five minutes of the restart.

Aribo has been Gerrard’s stand-out performer since lockdown was lifted and he scored a carbon copy of his strike against Motherwell last week, combining with Morelos on the edge of the box before prodding past Marko Marosi for the opener.

Morelos’ mood, however, only grew darker as he saw another big chance slip wide from a cute Ianis Hagi pass before he was replaced on the hour mark.

Allan McGregor pulled off a decent stop to deny Jodi Jones an equaliser but it was Rangers who sealed victory on 67 minutes as Goldson’s towering leap saw him glance home from a Tavernier free-kick.