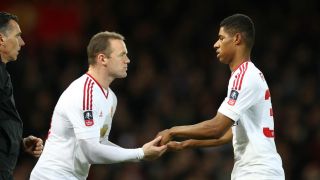 Manchester United and England captain Wayne Rooney has praised Marcus Rashford, tipping the youngster to make it hard for national team boss Roy Hodgson to leave him out for Euro 2016.

The 18-year-old was a surprise inclusion in Roy Hodgson's 26-man provisional squad for the Euros on Monday and Rooney has backed him to give the manager a headache when he has to select a final 23.

The country's record goalscorer feels Rashford has deserved his opportunities for club and country after impressing at Old Trafford.

“It's been great to see his attitude for a young lad," Rooney told MUTV. "He's come in, listened to the manager and the players - and he's worked hard.

"He's got a very good attitude and he fully deserves his chance for Man United and now England.

"He is in the England squad and I'm sure he will give Roy a difficult decision to make in terms of trying to get into the final 23."

Rashford netted in United's 3-1 victory against AFC Bournemouth on Tuesday to take his club tally to eight goals in 17 appearances in 2015-16.