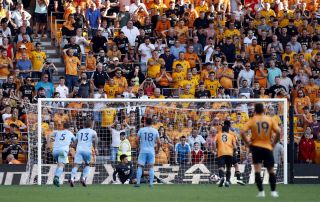 Ashley Barnes netted his fourth goal in three Premier League games to put the Clarets ahead but Wolves equalised deep into added time after Erik Pieters tripped Jimenez in the area.

Referee Craig Pawson pointed to the spot and after the decision was confirmed by VAR, Jimenez coolly stepped up to slide the ball past goalkeeper Nick Pope.

Sean Dyche’s side had enough chances to have sealed the points well before that as Burnley took advantage of Wolves’ busy start to the campaign.

Last season, Burnley made a slow start after playing in the Europa League qualifiers and Wolves’ schedule seems to be having a similar effect.

Nuno Espirito Santo’s side beat Torino 3-2 in Italy on Thursday night but this was their eighth game of the season so far and Wolves struggled to raise their game in the Molineux heat.

Wolves did not register a shot on target until the final few minutes – but after Burnley had controlled long periods of the game.

Barnes opened the scoring with a superb strike after move which he stared. Wolves defender Ryan Bennett failed to deal with a through ball from Ashley Westwood and Dwight McNeil set up Barnes to fire in from 22 yards.

It could have been worse for Wolves four minutes later as defender Ben Mee headed against the crossbar with goalkeeper Rui Patricio just managing to stop the ball going over the line from the resulting scramble.

But Burnley should have gone two up after 32 minutes when striker Chris Wood got the better of defenders Bennett and Conor Coady. And with only Patricio to beat, the Portugal goalkeeper managed to smother Wood’s shot.

Wolves began to settle and the recalled midfielder Morgan Gibbs-White shot just wide of the near post, but both Barnes and Westwood missed chances to increase Burnley’s lead.

Mee tangled with Real Jimenez and shoved the Mexico forward over with his elbow in an incident that went unpunished by referee Craig Pawson.

Burnley then lost Johann Gudmundsson, who came off injured to be replaced by Aaron Lennon.

Wolves fortunes appeared to be summed up with 21 minutes left when a promising attack ended as substitute Pedro Neto and Matt Doherty got in each other’s in the Burnley box.

Nuno sent on Adama Traore to inject some pace for the final stages.

But it was Jimenez who found a way through as, moments after he was denied by a post, he drew the foul from Pieters and then scored his first league goal of the season.